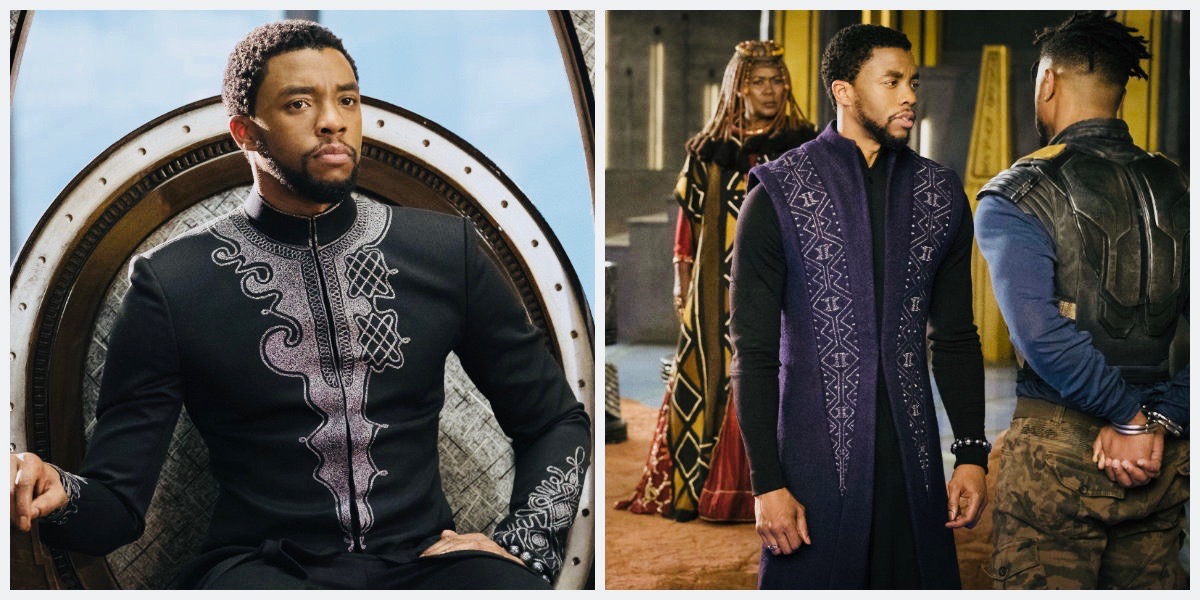 As many who have gone to watch the spectacle that is Black Panther (and probably felt a hype before they’d even watched it because, well… #ForTheCulture), my excitement shot up tenfold like the remotely controlled flying vehicles invented by Shuri in the film. 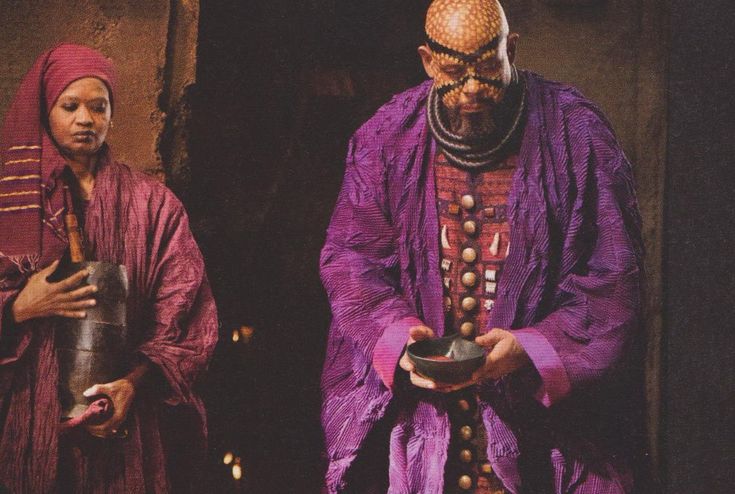 At one point, I semi-wished such a thing existed whereby I could make notes with my mind into an imaginary notebook just because of all the ideas that were being processed as I watched the film (I hear having your phone out during a film is a faux-pas). I was in total awe of the costumes. They sang to me, they shouted and they made me hypothetically do a lot of google searches. I wanted to know where these clothing ideas came from. I understood them, though. I could easily see the East African influence, the West African influence and at one point, in the deeply dark cinema room I nearly squealed out of excitement when I saw typography that mirrored that of Tifinagh (North African indigenous language) alongside the Tuareg inspired jewellery and dress.

I had to know more.

Upon a quick search, you can always rely on the internet to produce when necessary. Already available are downloads of similar typography to use.

Let’s talk about this. This an example of the Wakandan script. It alludes to the Tifinagh script of North Africa; present day Morocco, Algeria, Tunisia, Libya, Mali and Niger. The Tifinagh script is birthed from a long list of Ancient African languages that base their written systems on symbols, such as that of the Ancient Egyptians, and the Punic influences across the Mediterranean. 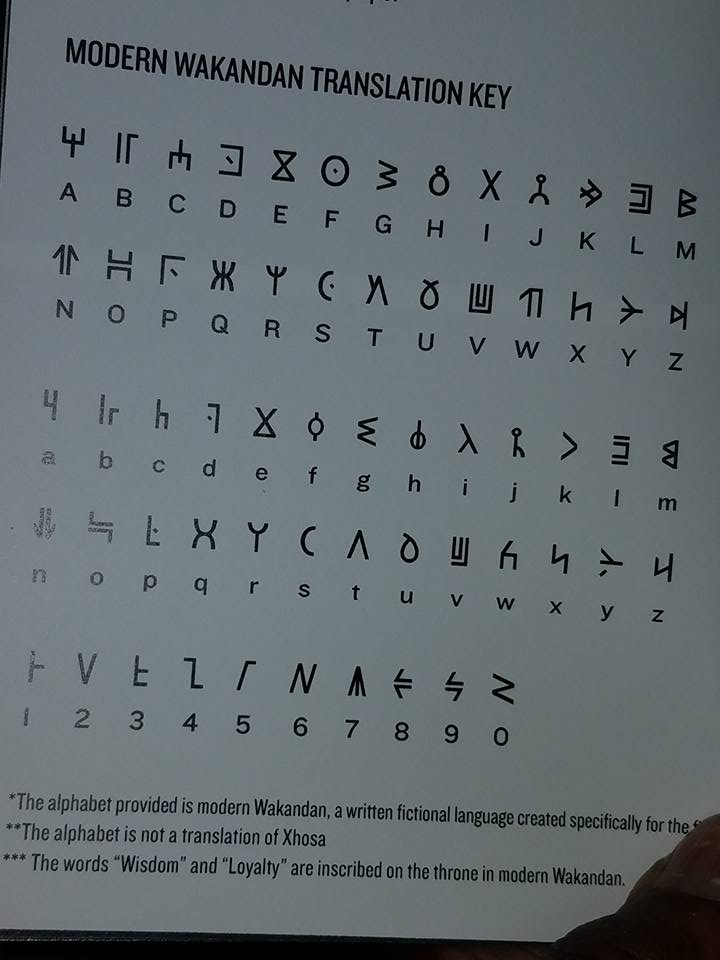 What is mirrored in Black Panther and that of the actual usage of Tifinagh is the fact that the languages themselves are more oral forms of communication rather than written scriptures. The scripts themselves, that look like forms of art and symbolism, are used sparingly and more so on walls and clothing to send out short yet precise messages.

That’s why you’ll find the Wakandan blanket style ponchos (coverta, anyone?) covered in this symbolism. The Wakandans will speak briefly in Wakandan, but the rest of the talking is all over their bodies on the clothing and jewellery.

The use of accessories throughout Black Panther was a silent scream toward the heritage of Africans and the link between the countries within the continent. The boundaries were blurred as no one country was assigned to the design, yet it was fun to decipher where the influence came from. 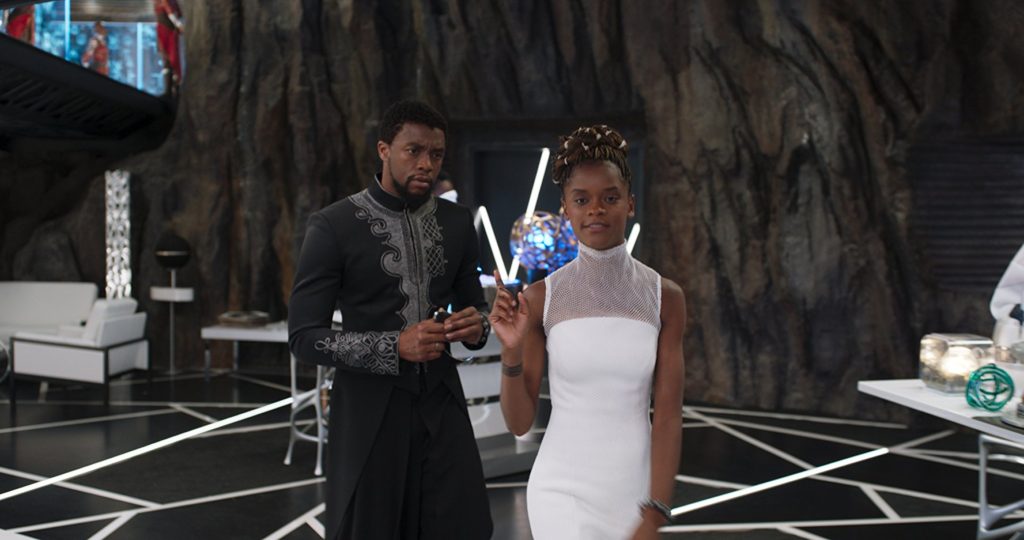 My excitement lay in the hard, silver jewellery that rested on the necks and crowned the heads of the Wakandans. I could see Algeria and Mali all over them. I could see the black, polished pearl-like ornament hanging of the beaded chains that were then cupped by the metallic symbolism of the nomadic tribes. Tuareg jewellery often combines jade, amber and other stones with handcrafted silver, each piece carrying its own meaning. It was a chapeau! to the blue people of the North.

The Tuareg believe that silver is the metal of the prophet and, in fact, Tuareg women often have a superstitious fear of gold and will not wear it.  Silver is a part of every family history, as it holds both symbolic and real value and is used for barter and trading. It is like wearing your wealth on your sleeve.

In Wakanda, the wealth is all over the nation, whether royalty or not. 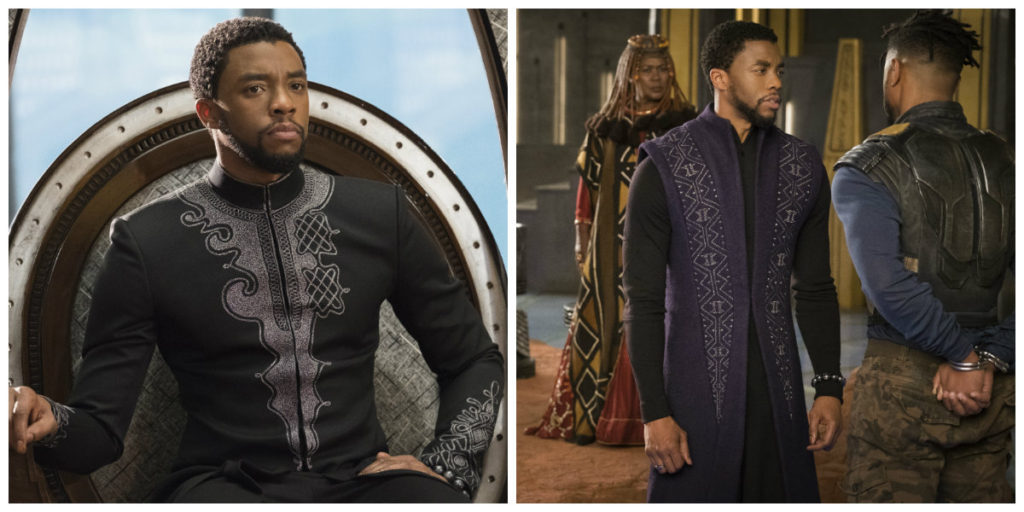 Forest Whitaker, who plays Shaman Zuri in Black Panther, is the spiritual leader of Wakanda. He wears heavily patterned, ornate gowns that flow from his shoulders all the way down. The dress falls at the shoulders and is roomy and boxy. Just like the traditional Jellaba style dress of Northern and Western Africans.

Many of the ornate patterns upon the dresses were ideas created by the costume designer Ruth E. Carter. She travelled to South Africa to receive permission to incorporate traditional Lesotho designs into the costumes throughout.

And variations of this are found throughout the film. The wrap around, the folded and hanging and the trailing behind. All an ode to the nomadic tribes who see the whole of Africa as home, regardless of boarders. It wasn’t just the men wearing these gowns, but many of the women, too. One of the elderly tribe leaders was clearly killing the (style) game with her Chaoui inspired clothing and heavy silver headdress.

Wakanda, lest we forget, is in Africa which means it’s hot. The blue people once again influenced the SPF method for Wakandans by providing head wraps and scarves that cover the head and face from heat and sand.

I have to give a special shout out to the King of Wakanda of course: King T’Challa played by Chadwick Boseman. On many a scene feature, he was dressed immaculately in black or white, and embroidered (I love you, mejboud!) tunics. The tunics were designed all across the collars, down the torso and the cuffs of the dress. Swoon.

That, if I do say so myself, looks like every North African king’s attire from the moment they learn to walk to the Eid day festivities.