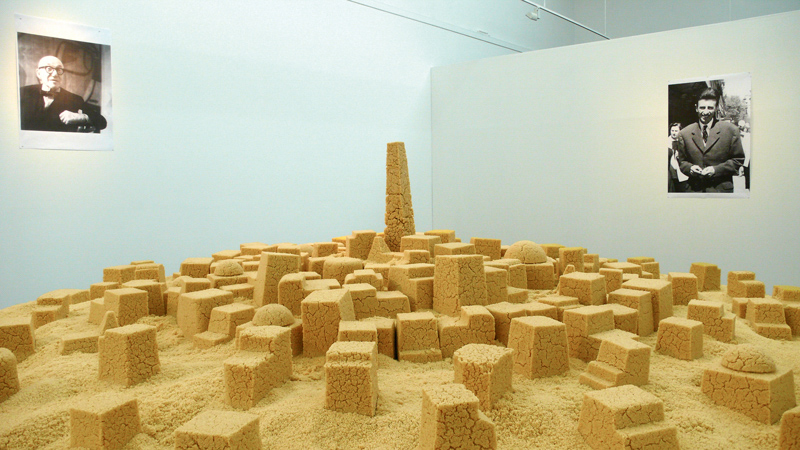 In our MUST SEE art series, Mehdi Ali introduces us to a contemporary artist with Algerian links each week in the hopes of broadening the Algerian art spectrum.

Geometric blocks of couscous form a scale model of the city of Ghardaïa in Algerian artist Kader Attia’s untitled installation.

The city of Ghardaïa is the highest of five towns, which make up Algeria’s M’zab valley that is six hundred kilometers from Algiers. The towns were built by a sect of Muslims known as the Ibadites who established one of the most sophisticated and oldest forms of city planning in Africa.

Placing the couscous model on a round table, Attia attempts to detail Ghardaïa’s oval shape. On the white gallery walls, Attia mounts black and white portraits of Swiss-French architect Le Corbusier, on the left, and French architect Fernand Pouillon, on the right. 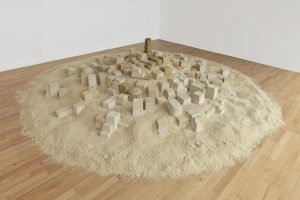 Le Corbusier traveled to the M’zab valley once in 1931 and again in 1933. His successor, Fernand Pouillon, went on to develop several structures in the region in the period immediately before and after Algerian independence.

The unexpected civilizations that Le Corbusier and his peers stumbled upon on the African continent, allowed for what Attia describes as, ‘new ways of looking’.

By using couscous, a staple food of North Africa that is native to the region, Attia uses ideas of colonial consumption in a playful manner.

Metaphorically, not only can Attia’s installation be literally consumed but it also serves as a model for hungry modernist architects to salivate over new ideas for city-planning.