Dar MUSTAPHA PACHA, is the residence of the minister of finance during the Ottoman empire in Algeria. Built in 1799, after the french invasion in 1830 they turned it into a private residence for military officers and then it was converted into a National Library from 1863 to 1948.
In 1992 it was classified as a world heritage by UNESCO, and in 2007 it was reopened to beome the National museum of the arts of illumination, miniature and calligraphy. 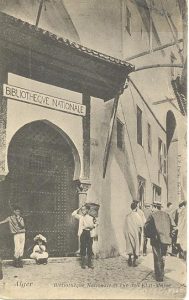